COZA Pastor, Biodun Fatoyinbo has finally spoken on the allegation of rape against him by Busola, the wife of Nigerian singer, Timi Dakolo.

Savagehq had earlier reported that Busola accused the pastor of sexually harassing her severally.

She explained in an interview with Y!Naija how Pastor Biodun allegedly tried forcing to have sex with her in his matrimonial home when she came to assist his wife when she delivered her first child.

Reacting to the allegation, the COZA Pastor, Biodun Fatoyinbo claimed he has never raped anyone before.

“I am aware that there has been a recent media publication on YouTube by YNaija operated and owned by RED Media Group which shows an interview by Chude lideonwo with Busola Dakolo.

“Prior to now, we had adhered to our policy of ignoring rumours from social media accounts as we knew that several statements had been made to extort the church of money and myself through blackmail, harassment and intimidation. We have refused time and again to accede to their request, which has infuriated them overtime, because of this they have gotten more aggressive.

“Unlike previous statements where innuendos were used and there was no direct mention of myself or the Church, the recent video released on YouTube has now made direct Criminal allegations against me in the Intervlew granted by Busola Dakolo which are fallacious, nonexistent and which are all denied In every measure. As an individual and as a Church we love and support people, and we will never condone any form of abuse, rape, harassment, or intimidation of anybody. I have never in my life raped anybody even as an unbeliever and I am absolutely innocent of this.

“Busola Dakota, who has made this false allegation and her family attended the church during the early start of the church In florin In 1999.1 never had any private interactions with her beyond my pastoral duties. Looking at her status and that of her husband, 1 am dumbfounded why she would say such a thing. As expected under the ethics of journalism, it would have been expected that I should have been confronted with these false allegations prior to any publication. instead of resorting to social media with the intent to ruin my reputation and bring down the church.

“We will also not stand for false criminal allegations made against me or the church. The leadership of the Church and I have briefed our lawyers to commence Criminal and Civil actions against all individuals making such false allegations whether directly or by proxies. We will as a church pursue every measure within the ambits of the law to bring the culprits to justice. We have heard, and we will not be surprised to see more of such allegations by people who have been paid to continue in this line of blackmail, harassment and extortion including those who may have been dismissed from their duties in the church on disciplinary grounds. To all our members and those supporting God’s work, I want to assure you that we would fight this and the Lord will vindicate us. This has always been intended to attack the church, this is the intent of the adversary, the intent is to destroy the church, so please stay focused and prayerful. God Bless you. I celebrate you. 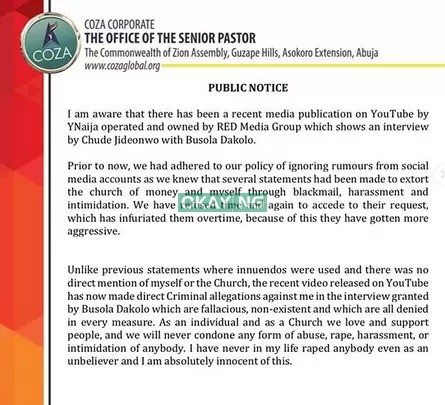 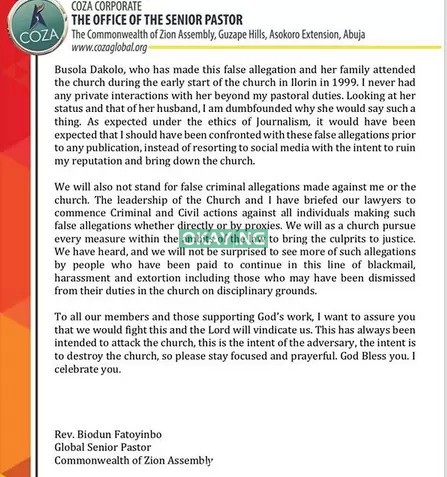