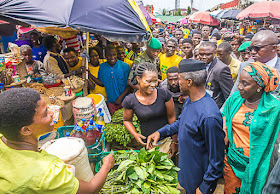 Kogi State Coordinator of the Buhari Media Center, Mr Williams Charles broke the news on Facebook, calling for prayers for the Vice President.

However, sources have confirmed that Prof Osinbajo came out of the crash unhurt and is presently at the stadium where he was being received.
He was meant to visit the three senatorial districts of the state according to the schedule which might change if affected by the mishap.
Meanwhile, his media aide, Laolu Akande said the vice president will continue with his engagements and plans for the day in the state.